What’s worse than a lawyer billboard?

How about dozens of them. All over town. That’s what we have here in Joplin. A local firm put up something like a hundred billboards across the area. Maybe more. They seem to be accumulating like legal fees.

As evidence of the ad proliferation, we would direct your attention to the following three exhibits. While the locations are real, we’ve replaced the actual ads with pretend examples. 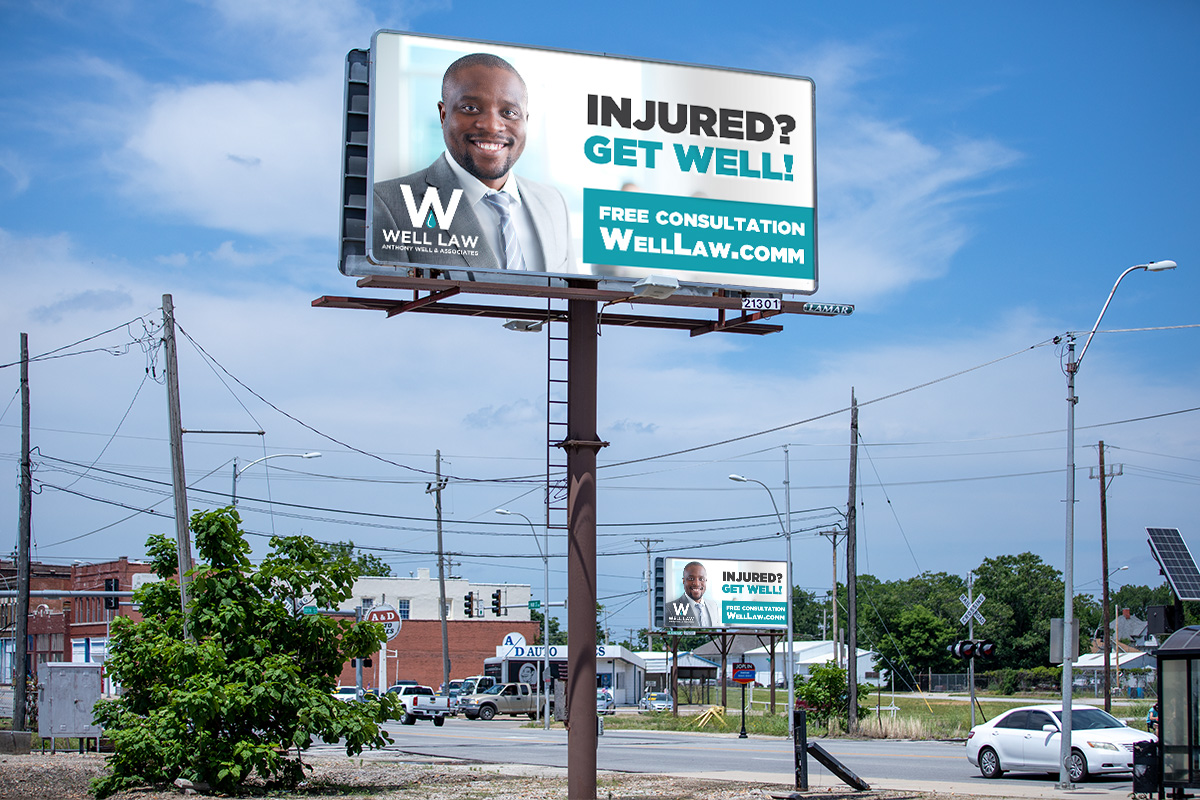 These two signs are just across the street from one another. (In case you're wondering, the ".comm" is intentional. We didn't want to use a real domain in our fake ad.) 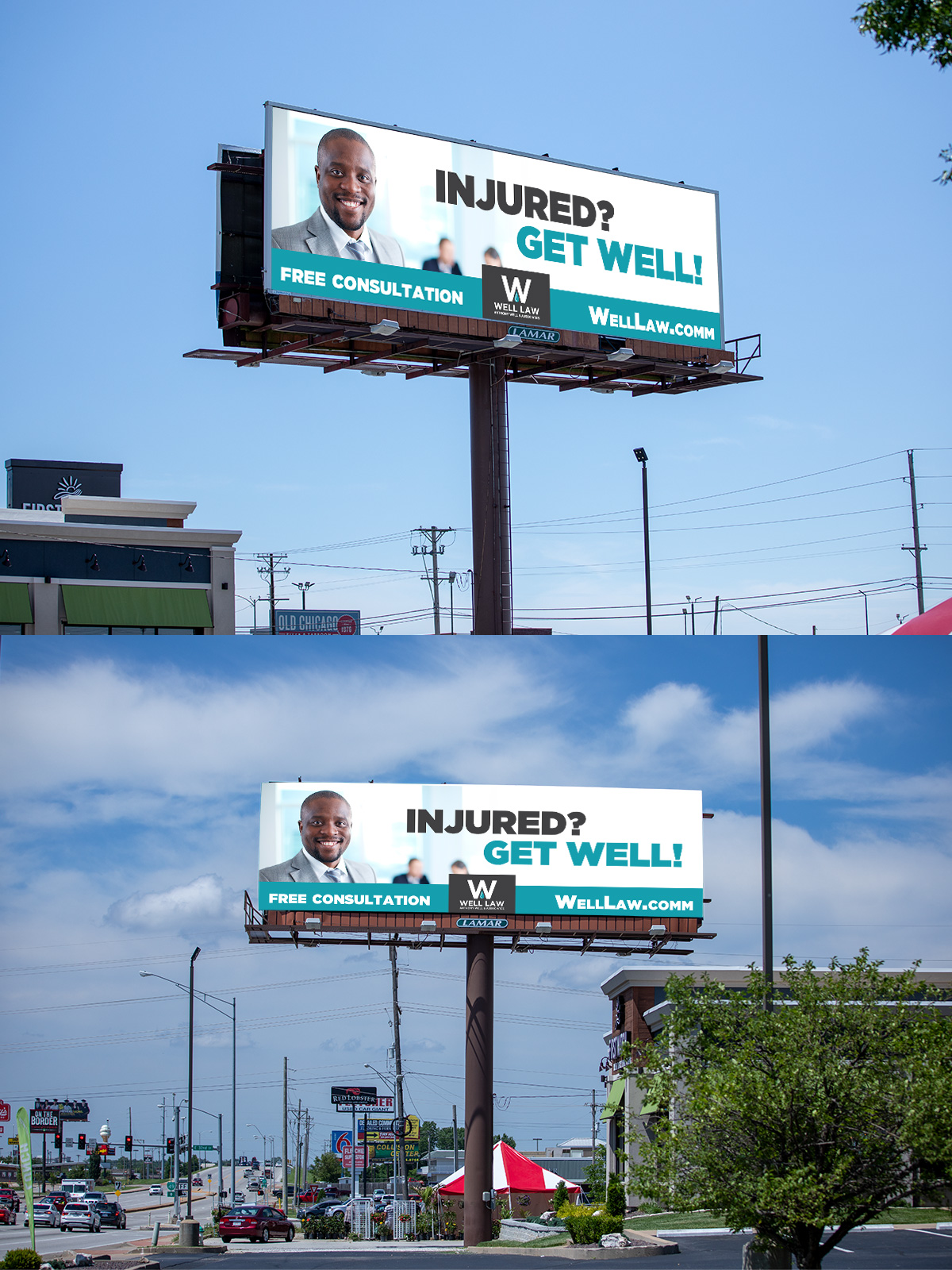 These two are back to back. 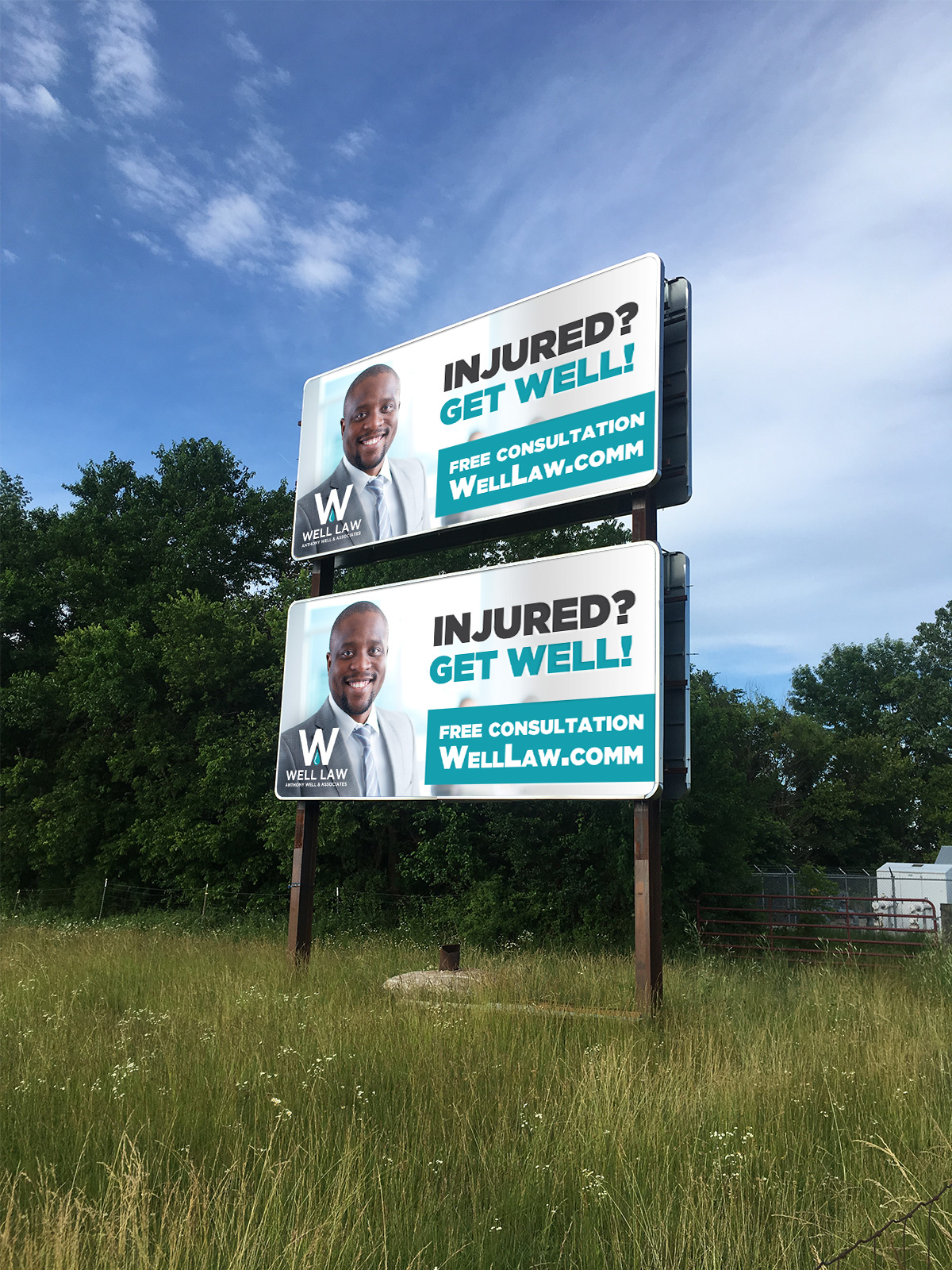 And yes, top and bottom. (Full disclosure: these two have since changed, but for several months, they were stacked just like this.)

As a sort of legal disclaimer before going further...

...let's be clear that we, the plaintiff, have no accusation against the law office itself. By all accounts, it’s a reputable firm that provides top notch service. We would, however, like to make a case against their current billboard campaign. It’s just a bit much—especially since it’s been the same sign in every location for going on a year now.

That got us thinking about the importance of ad prudence—the need to balance the scales between what an ad is saying and where, how frequently, and for how long. Here’s a little pro bono counsel along those lines (and it’s relevant to any industry, not just the legal profession.)

Make sure the ad isn’t a crime.

Many legal ads are. Crimes, that is. You’ve witnessed them. 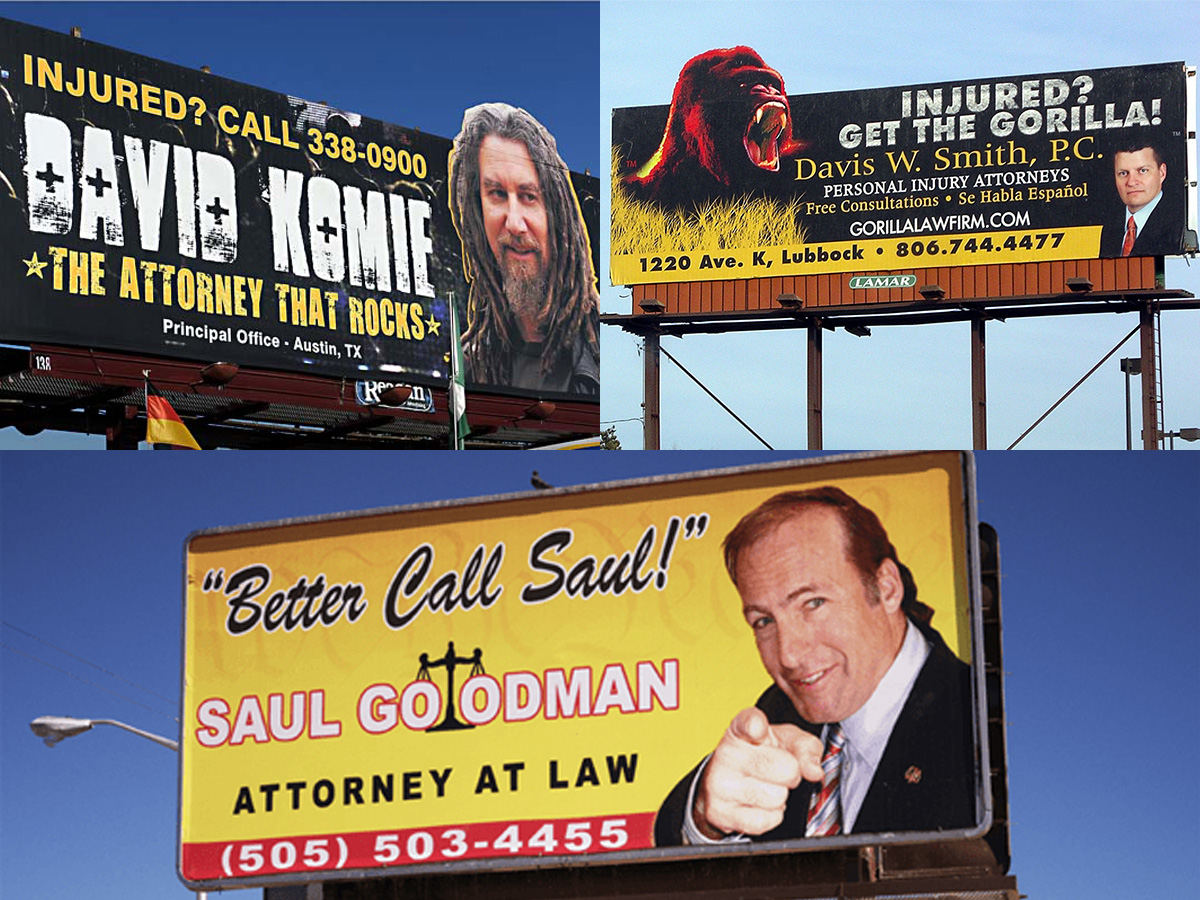 To be fair, most attorney ads aren’t this bad. They’re just the same. Predictable. Our example follows the model of typical personal injury ads:

Change out the picture and a few words, and this could be any firm’s ad. There’s nothing especially unique or memorable about it, and frankly, we expect better from law firms. Like attorneys, legal ads should make compelling arguments. Imagine how much more persuasive this billboard would be with a better message. Maybe something like this. 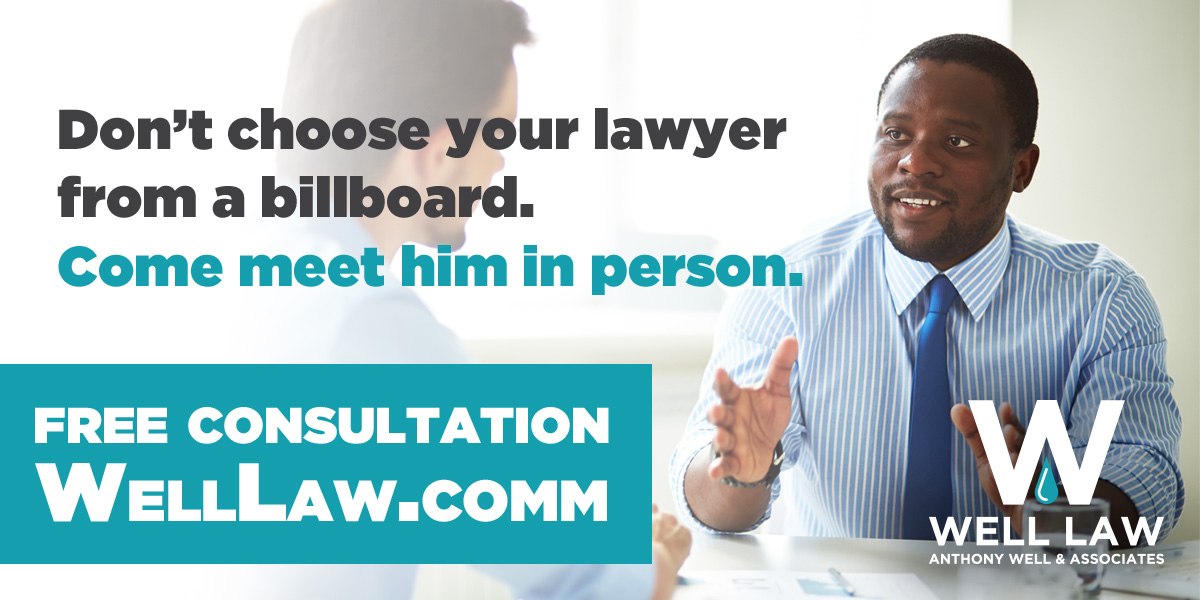 That looks good in place, and the new billboard across the street is a huge improvement, too! 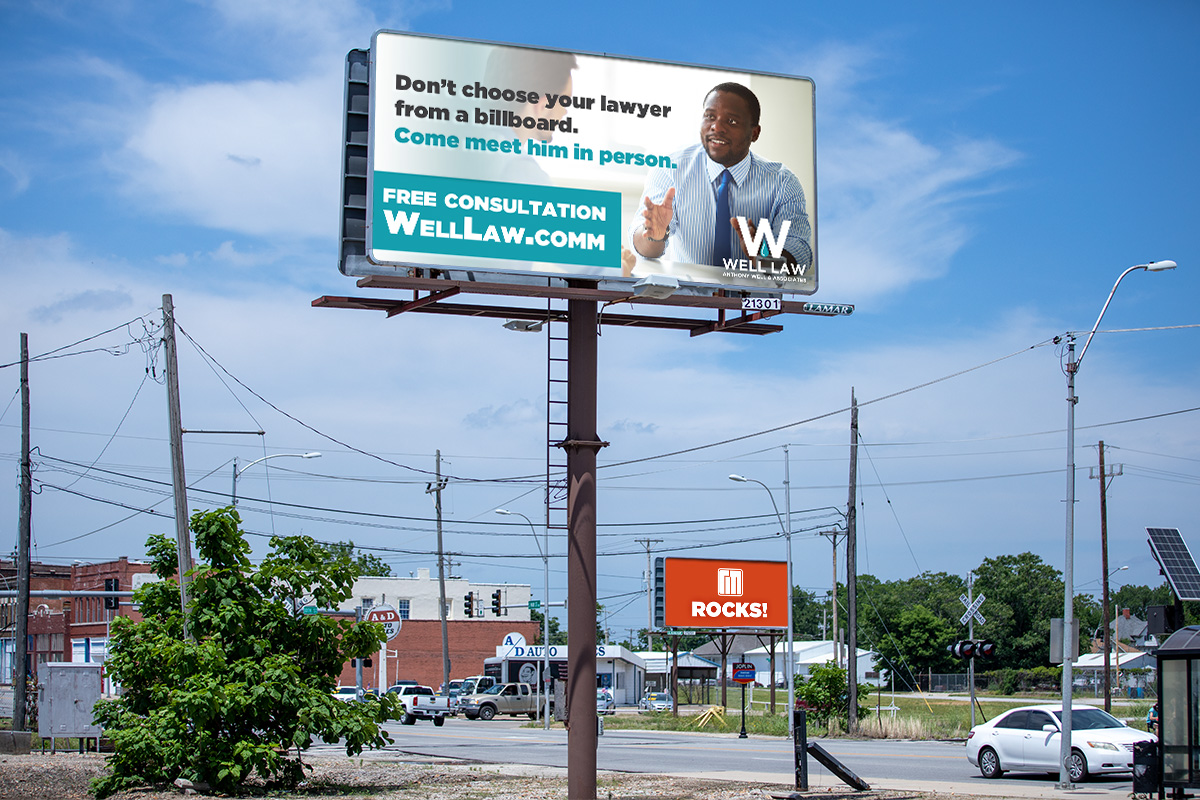 Don’t chase ambulances, but go where the action is.

Advertising should be targeted. It should try to persuade the pertinent people and places, not everyone everywhere. While these widespread billboards will generate some name recognition, they’ll largely be ignored and forgotten by the vast majority of people who don’t need a personal injury lawyer at this moment.

It would be far more effective to target strategic locations—near hospitals, rehab centers, or even other law offices—rather than to placard the whole town. It’s also wise to diversify the ad mix as opposed to using just billboards or any one medium. Of course, the other key is to track the results of every ad placement to know whether it’s working or not.

Don’t make people want to sue you (or get a restraining order).

Overadvertising turns recognition to resentment or unresponsiveness. Exposed to the same ad too often or for too long, people will start to hold it in contempt. The fix here is simple: don’t drag out your case. Get to the point. Make your argument. Present your best evidence. Then close the case and move on to the next.

Advertising should be a series of relatively short and measured campaigns that, together, aim to win over the customer.

...make a compelling case, present it to the right people and places, and keep it succinct in terms of frequency and duration. Once you’ve done that, repeat the process with a new campaign.

And should you find yourself embroiled in marketing troubles, we can’t provide legal advice, but would gladly offer council or representation in any and/or all aforementioned advertising matters.

We rest our case. 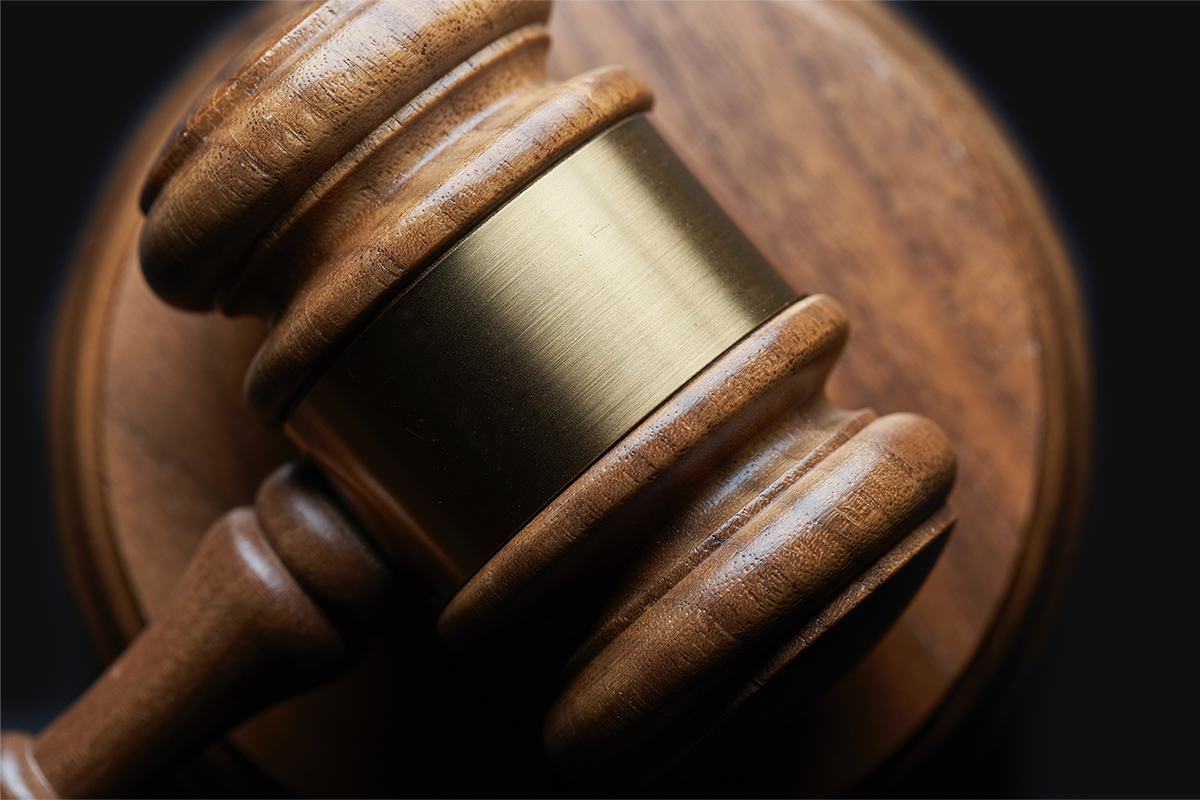